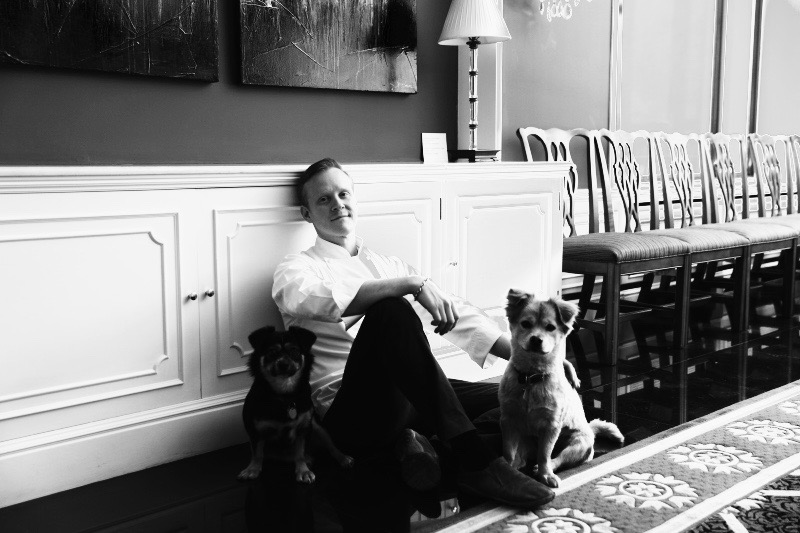 Inspired by parents who were both experienced restauranteurs, Michael discovered his passion for cooking quite young.

In the summer of 1994 he found his first paying job in the kitchen of an Atlanta pizzeria and never looked back. Later that year, Michael found himself at Formosa- a quiet 25-seat restaurant in Marietta with a growing reputation for the area’s best authentic Cantonese cuisine. He was 15 when he began packing delivery orders and bussing tables at Formosa 3 nights a week. No one imagined that Andy and Lily Tam, and their tiny neighborhood eatery, would play such a determining role in his life.

Four years later, as a skilled apprentice chef conversant in Mandarin Chinese, Michael accepted a full scholarship to Shanghai Normal University in the People’s Republic of China for a semester of intensive language study. It was here that his dream of mastering the art of authentic Chinese cooking was born.
Upon returning to The States, Michael spent the next year and a half in Hawaii, working alongside chefs like Alan Wong, Sam Choy, Roy Yamaguchi and Jean-Marie Josselin, before moving to Upstate New York to complete his undergraduate studies.

The following year, Michael was accepted by Cornell University’s famed School of Hotel Administration and completed an externship with Four Seasons Hotels and Resorts in Taiwan. In 2001, he returned to China yet again, this time on full scholarship to Tsinghua University via University of California, Berkeley’s IUP Program. Michael graduated with a degree in East Asian Languages and Literature from Cornell’s College of Arts and Sciences in the winter of 2002.

Eventually, Michael settled in Lower Manhattan’s Chinatown, as the first and only Caucasian apprentice chef in the community’s history to do so, finding a niche as a Shanghainese Dim Sum chef in the basement kitchen of The Moon House Restaurant on Bayard Street.

Michael relocates to Kansas City, running his own restaurant, Jun’s, while also serving as Culinary Director of The Kansas City Heart Foundation.

Michael returns to China and attends culinary school in Beijing. He graduates late fall and sits for his exams. The following spring, Michael becomes one of the select few foreign chefs to receive official license from the Chinese government in traditional culinary arts as he receives his Advanced Chinese Pastry Certification.

Michael enrolls in culinary school once again, gaining two additional certifications before taking to the road in search of China’s vanishing culinary heritage.

Over the following year, he traverses China by bicycle, train, motorcycle, bus and several pairs of grass shoes.

Michael accepts a consulting role with Chengdu’s oldest and most famous hotel, The Min Shan, designing the first Michelin-quality fine dining western restaurant in the province. During the half year of the restaurant’s design and operation, it is awarded five stars by Sichuan’s Tourism Bureau.

Michael is called to serve his country, accepting a position as personal chef to Ambassador Gary Locke at his official Diplomatic Residence in Beijing.

At the arrival of Ambassador Max Baucus, Michael is given charge of the entire Diplomatic Compound, managing all aspects of official functions, as well as the personal needs of the family.

Michael is invited by The World Wildlife Foundation and United Nations Environmental Programme to deliver a keynote address on the subject of environmental sustainability for 2016’s live broadcast of Earth Hour with Actress and Global Goodwill Ambassador Li BingBing.

Michael is recognized in 2016 as one of the 100 most influential people in China by Food and Wine Magazine.

Michael completes his contract with Ambassador Baucus and resigns his post. In the nearly three years Michael serves at The Residence, he personally executes over 200 events, cooking for notable figures from presidents and other heads of state, to stars of the big screen, business leaders and champions of social and environmental activism.

Michael is awarded certificates in Artisan Bread and Sourdough from The San Francisco Baking Institute.